David Ben-Gurion: Founding Father of the Modern State of Israel

You are here:
HALL OF FAME 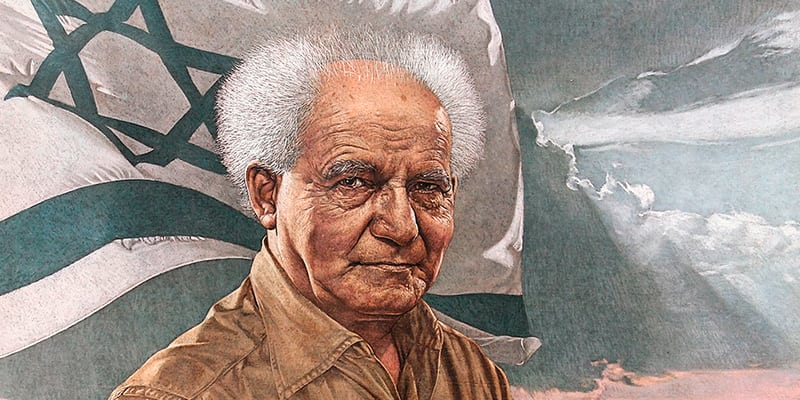 On May 14, 1948, David Ben-Gurion — speaking in Tel Aviv under a portrait of Theodore Herzl, founder of modern Zionism — declared the establishment of the Jewish nation of Israel. The declaration was the culmination of a 2,000-year-long dream of Jews to return to their ancestral homeland and live as a free and independent people.

Ben-Gurion was born David Grün in Poland — then part of the Russian Empire — on October 16, 1886. His father was an ardent Zionist; at an early age, David helped found a Zionist youth club that advocated studying Hebrew and immigrating to what was then called Palestine.

David Grün made aliya (the act of immigrating to the Land of Israel) in 1906, when the area was ruled by the Ottoman Turks. Like many Zionist pioneers, he changed his name to a Hebrew one: Ben-Gurion, which means “son of a lion cub.”

Ben-Gurion is regarded as the founding father of Israel. During the War of Independence — which started the day after his declaration of statehood, when forces from five Arab states attacked — he succeeded at forging a united Jewish army (the Israel Defense Forces) out of a number of disparate Jewish militias.

He died on December 1, 1976 at age 87, after suffering a stroke two weeks earlier. Following his death, Time magazine included him in a list of the “100 Most Important People of the 20th Century.”
Source: Wikipedia

“In Israel, in order to be a realist you must believe in miracles.”

“Israel has created a new image of the Jew in the world — the image of a working and an intellectual people, of a people that can fight with heroism.”

“Ours is a country built more on people than on territory. The Jews will come from everywhere: from France, from Russia, from America, from Yemen… Their faith is their passport.”

“Suffering makes a people greater, and we have suffered much. We had a message to give the world, but we were overwhelmed and the message was cut off in the middle. In time there will be millions of us — becoming stronger and stronger — and we will complete the message.”

The information above doesn’t even scratch the surface of David Ben-Gurion’s fascinating life. Learn much more on Wikipedia. >>

Watch David Ben-Gurion proclaiming the establishment of the State of Israel (English subtitles) [2:23]. >>

Watch a documentary about David Ben-Gurion and the establishment of the State of Israel, narrated by Henry Fonda [22:37]. >>

Sigmund Freud: The Revolutionary and Controversial Founder of Psychoanalysis
January 13, 2020